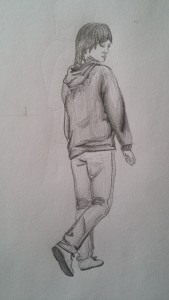 Marco’s greatest weapon was comedy. Despite the tragedy of loosing his mum young, he could still laugh.  He taught us you either laugh or cry. And he would rather go out laughing.

“You grind my nerves sometimes, Marco, always joking the way you do.  But keep it up, okay? We need a sense of humour” ~Rachel, #5

Marco was the most reluctant of them all. The last thing in the world he wanted to do was fight. He didn’t want his already clinically depressed dad to be putting flowers on two graves. Marco was all his dad had left after Marco’s mum was “lost at sea” two years ago.  But Marco soon discovered his mum’s death was actually a cover up, and his mum was being controlled by the highest ranking enemy. The one solely responsible for the invasion and enslavement of Earth.

When Marco’s dad recovered and moved on with his life, Marco, knowing full well his mother was still alive, had to support his dad’s choice to marry another woman.  Knowing if his dad found out the truth, then he would be dead, or worse.

After that Marco was devote to the fight.  It soon became clear he was the strategist. He could see the line from point A to B. He could work out how to achieve their goal, without getting distracted.

“People don’t understand the word ruthless. They think it means ‘mean.’ It’s not about being mean. It’s about seeing the bright, clear line that leads from A to B. The line that goes from motive to means. Beginning to end. It’s about seeing that bright, clear line and not caring about anything but the beautiful fact that you can see the solution. Not caring about anything else but the perfection of it.” Marco #35

Unfortunately for Marco, one of those annoying distractions was the emotion involved in the host body of his number one enemy.  It still didn’t stop him though.  And he orchestrated a master plan that would see the end of both the enemy leaders.  As a result thought he sets his mum up as collateral.

Kids would study us in school.  Bored, probably.  And then the teacher would tell the story of Marco.  I’d be a part of history.  What I was about to do.  Some kid would laugh.  Some kid would say, “Cold, man.  That was really cold.”  I had to do it, kid.  It was a war.  It’s the whole point, you stupid, smug, smirking little jerk! Don’t you get it? It was the whole point.  We hurt the innocent in order to stop the evil. ~Marco #30

Marco, stood and looked his mother in the eye, knowing full well she was staring back at him but unable to do a single thing, not even blink, because her body was being controlled.  He then threw her off a cliff.

See, win or lose, right or wrong, the memory of violence sits inside your head.  it sits there, like some lump you can’t quite swallow.  it sits there, a black hole that darkens hope, and eats away at everyday happiness like a cancer.  It’s the shadow you take into your own heart and try to live with.   ~Marco, #10